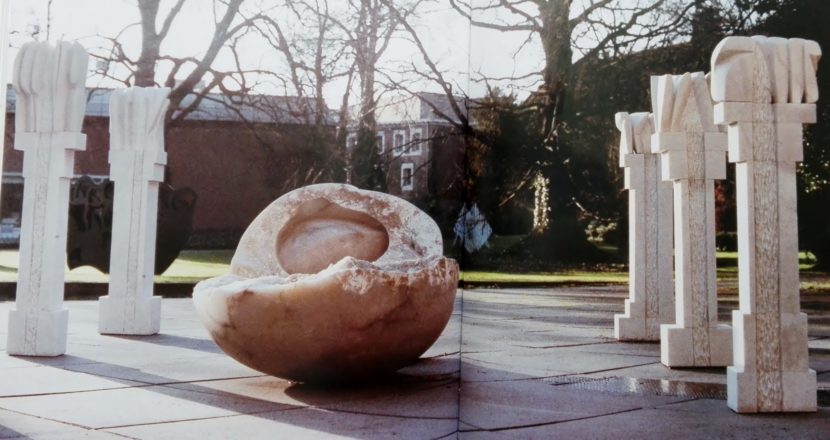 The one who softens stone

This group of statues called Montagna Fontana (Mountain Fountain) by Dutch sculptor Ans Hey (1932-2010) was first exhibited in Arnhem, The Netherlands, in 1990 (see photo taken from the book Ans Hey above). Six white marble pillars guarded the large alabaster sculpture in the middle. They looked like fountains of pure strength held captive in stone. They stood around an alabaster ‘egg’, cracked open revealing a promising center, a fertilized seed of some kind.

This solo project took three years of carving and sanding. The story of the central piece is special. The artist first had to find the stone to actualize her idea. She came across an enormous alabaster rock at the border between Umbria and Tuscany.

It was lying in a deserted field close to an old stone factory, as if it was resting there since the time of the Etruscans. The rock weighed over four tons and was the last of its size left in Italy. I wanted to find its heart, the musical soul of the stone, which I hoped was alive and hidden   within it. Before moving the rock, I carved into its surface abstract images of elements of the surrounding landscape with its shifting lines and rough ploughed earth, so that wherever it travels it takes with it the landscape of its origins. (Ans Hey)

The rock became an artwork consisting of two pieces: a somewhat larger sculpture with an intensely polished ‘heart’ and another piece that looks like the removed shell that was there to cover the previous one.

Every stone has its own sound when a sculptor hits it, and it also has veins of minerals in it that will make some forms possible and others impossible to carve. To cut such a large piece in the right way, you have to understand it first. When this stone was hit, unexpectedly it broke in two. The artist saw the potential in the way it was ruptured and used that ‘accident’ to the full. She adapted her ideas and created the central piece of Montagna Fontana, the Large Alabaster. A soft nurturing ‘egg’ with a visible and promising center was born.

Three decades later, this sculpture was interpreted as the 14th and 15th stations – Jesus is Laid in the Tomb and The Resurrection – of Art Stations of the Cross 2020 in Deventer. It was placed on the ancient burial grounds of the 12th-century cross basilica, the Bergkerk of Deventer. It looks like a white meteorite that hit the highest ground of the city and burst open on the spot.

There are many invisible so-called graves of the poor there. One tends to ponder one’s own transience in a place like this. But does death have the final word? This question is answered by the story of Jesus’ resurrection. The alabaster sculpture signifying a new beginning forms an answer to that question too. We are inspired to contemplate on the mystery of new life, eternity set in the human heart.

The inspiration of the artist preserved in this monumental work has an eternal permanence. This time without the six marble pillars, it stands on its own as a powerful symbol of a long anticipated yet surprising transformation. We expect the impossible to happen, the dead to resurrect, the heart of a stone to become soft and alive by divine interference.

Forget the former things; do not dwell on the past. See, I am doing a new thing! Now it springs up; do you not perceive it? I am making a way in the wilderness and streams in the wasteland. (from the book of the prophet Isaiah 43:18-19; 800 BC)

The title of the text (the one who softens stone) is a sentence borrowed from a poem by Gerrit Kouwenaar; used by José Boyens in the book Ans Hey, 2004.

Ans Hey (1932-2010) studied drawing and painting in Amsterdam, London and Avignon. She became acquainted with the art of sculpting stone at the Saint Martin’s School of Art in London. Besides in several Dutch museums, she exhibited in Paris, London, Indonesia, Italy, Belgium, USA, Sweden and Finland. She organized several multidisciplinary projects. As an inspiring teacher of sculpting she taught for more than 20 years at the Gerrit Rietveld Academy in Amsterdam, a well-known autonomous breeding ground of art.

Anikó Ouweneel is a cultural historian and art curator, who organized more than thirty art exhibitions. An expert in the area of (religious) cultural heritage, she specializes in placing modern art in ancient buildings. In 2019 she curated the Art Stations of the Cross in Amsterdam together with Marleen Hengelaar-Rookmaaker. The 2020 version in Deventer she put together with Arent Weevers. She works on two extended European art projects the coming years.