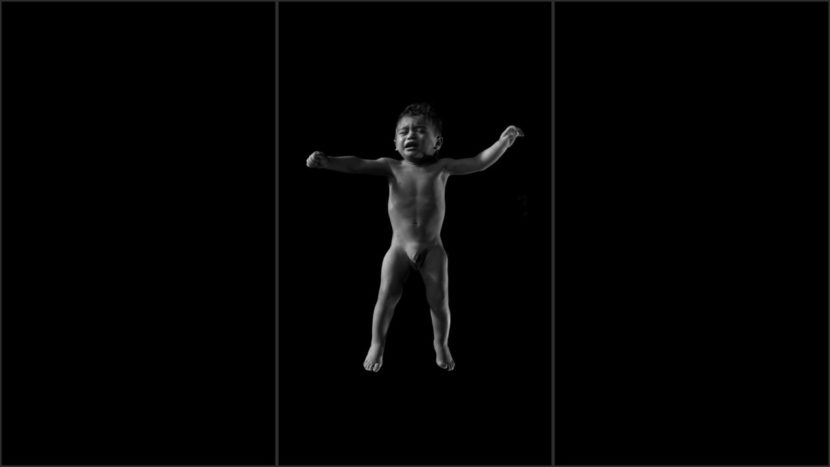 (a preview of the video loop is to be seen here, the whole installation is now in Barcelona)

Weightlessly floating in space surrounded by hollow darkness. The conscious knowledge that your soul is innocent and vulnerable, longing for contact but alone and forgotten, is an evocative universal fear. These are my associations while watching the first seconds of Arent Weevers’ video installation Triptych. He elaborates further on this chilling image and creates an enigmatic story in his own tranquil manner.

The installation is set up as an altar piece, recognizable in the Christian visual tradition around the globe. We face three screens, each of them showing a different naked baby boy. Moving in slow motion at least one of them seems to try to relate, to reach out to the others.

The cosmic scene is carried by a soothing breath, a life-giving song of an invisible mother, who is omnipresent through her voice. As if we can hear the soundless harmony of the spheres. It resonates with a timeless human yearning, strangely ancient and modern at the same time. It contains an enchanting, occasionally rather alienating echo as well as the sound of instruments. The melody is sometimes painful and distant, sometimes playful and embracing, yet always comforting as it signifies that they are not alone. It could be the sound of an angel or the Creator himself, humming lovingly, touching the soul, watching, caring and nourishing as close as can be. From heart to heart.

The music with its repetitions and slight shifts has a wondrous connection to the movements of the infants. As if the mother sings the babies alive, sustains them with a new lively intensity every time the cyclical repetition with slight differences commences. They seem to respond to her and she responds to their movements and informs their story.

The triptych reference to the retable alludes to the life of Jesus Christ. An altar is always a place of sacrifice. That little baby had the potential of defeating death by the power of living for others, the Other. This mystical link is amplified when the video is watched in this context:

The little boy in the middle seems to be the one struggling to establish connection, crying out for the others. There is an apparent choreography in the synchronicity of their movements, in the rhythm of how they change from black and white to colour, and in the way the music weaves it all together. That is, if you have the chance to watch the whole video carefully.

The sequence of the infants turning into colour, the way they gesture, appear and disappear, seems to suggest that the one in the middle struggles painfully in order that they all become colourful, ‘alive’, connected living souls. Only when that is accomplished, he is at ease and remains in colour. A journey from lifelessness to life.

In the middle of the more than 12-minutes-long video there is a full stop when all goes black, just after the infant in the middle stretches his arms in a crucifixion-like position (shown in the still above). Then the loop begins again and close to the end all three appear in colour.

A state of despair transforms into consciousness, into existence. Light and colour make the desolate place warmer. Hope for connection makes it less lonely.

By means of relating ancient symbols and music to personal experiences of the viewer, this symbolic and allusive piece of art can heighten one’s awareness and make the spectator perhaps a little more alive.

Arent Weevers is specialized in spirituality and video art. He works as a student pastor in Deventer. He studied theology at the Free University in Amsterdam and in Leiden. In 2010 he received the prize for ‘Best International Video Art Short’ during the New York International Film Festival for Mary! (2008). In 2014 Embrace Me was chosen during Unpainted, Media Art Fair in Munich, Germany as ‘highlight of new media art’. The artist has derived the images for Triptych from his earlier works, such as Embrace Me (2012) and Ecce Homo (2015). The premiere of Triptych is at LOOP Barcelona. More info: www.arentweevers.com

Anikó Ouweneel is a cultural historian and art curator. She co-curated more than thirty art exhibitions. As a (religious) cultural heritage expert she focuses on placing modern art in ancient buildings. In 2019 she curated Art Stations of the Cross Amsterdam together with Marleen Hengelaar-Rookmaaker. Arent Weevers’ Triptych video installation will be placed on the altar of the Lebuïnuskerk as the first station of the cross in the 2020 edition of Art Stations of the Cross in Deventer, curated by Anikó Ouweneel and Arent Weevers. For more see www.visiodivina.eu.

This text was published earlier as an ArtWay visual meditation on 24 November 2019.