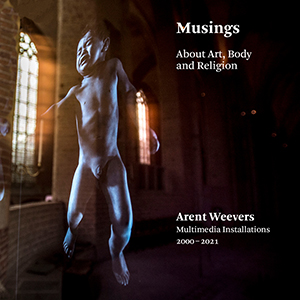 A striking void functions as supporting background in the works discussed in the book Musings by Arent Weevers. The artist writes about absence as a response to longing. “Is there Something (or Someone) that is not of this world and can therefore definitively satisfy the hunger, the need? That is greater than all the existence together, and concurrently restrains from it? That calms humanity’s constant desire for more?” (p. 19). His own answer to this question is: “You have been put on the track of God when you try to answer the call of the other.” (p. 126)

The life wisdom of artist and theologian Arent Weevers has been turned into a book that forms a work of art in itself. As a social worker, grief counsellor and student pastor, he has always been fully present in conversations, taking his time and focusing on the other. Without the urge to solve the problems, he pays attention to the person opposite himself and asks questions. This listening attitude – loving attention – is the source of his involvement and forms the starting point of his genuine media art (3D stereoscopic and/or interactive installations, holographic work and ‘regular’ video art), which connects film, dance and theatre. In this book he grants a glance behind the scenes.

For Weevers, art and theology are ‘the two bosoms of one heart’. Both search for existential cores, approach the mysteries of life and death, the timeless and the temporal. They operate on the threshold of the visible and invisible. His works of art generate experiences of compassion for oneself, for life, compassion for fellow humans or ‘the Other’. Positive and negative emotions can emerge at the same time. In any case, many viewers experience respect and reverence for the inscrutability of existence and sometimes they are confused by the intensity of the experience.

Musings is permeated with the relationship oriented thinking of one of the greatest thinkers of post-war 20th century, Emmanuel Levinas. This philosopher aptly summarizes the art of living: ‘It is not you who gives the world a place, it is the Other who addresses you, appeals to you and gives you a place.’ In contrast to the egocentrism of the philosophical tradition of his time, Levinas speaks of ‘the countenance of the Other’, the unknown who calls upon our humanity. He emphasizes the distinctive entity of the other who appeals to us and gives us insight.

This book discusses ten media installations in terms of art and theology/philosophy. Each work is accompanied by an expert’s reflection, followed by often sensitive and personal thoughts of the artist himself about the origin of the work and adjoining stories. Also visitors’ comments are included. Many good photos (also on location) accompany the texts, several on double fold-out pages.

The art viewer has become accustomed to slow-motion video images since the work of Bill Viola. There, directed performances of a few seconds are slowed down to minutes of meditative experiences. Time solidifies, the viewer senses tranquillity. In the intensity of slowness we are confronted with what is essentially human.

Weevers manages to get even closer to the viewer than Bill Viola. How surprising it is to watch a floating baby (one can surely not direct) moving extremely slowly in a well of an ancient crypt (Well – 3D stereoscopic installation, 2017). His techniques are also more versatile. Take his interactive installation Travelling of the Heart, in which the heartbeat of two visitors make the elderly naked dancers move on the screen. It is of course an illusion to connect a film to real life, but with your own heartbeat you can come very close. Therefore, the reactions are often overwhelming. Sometimes the sensory orientation of the visitors wavers for a while. The communication flow of the works is other than usual.

The use of naked bodies is perhaps the most provocative way to express vulnerability. It makes the viewer sympathise more quickly and forms an instant confrontation with one’s own physicality, one’s own existence. The human shape in particular plays an important role in his connection of art, body and religion. In the case of 3D installations, the visitors often have – in addition to strong feelings – a physical reaction too.

Weever’s media installations are filled with awe of life as well as awe of suffering. Vulnerability and strength, pain and loneliness, desire and touch, awareness of one’s own physicality are recurring themes in the installations. Marvel, dance, hurt, hover, disappear; Weevers is able to appeal to the viewer’s ‘orphanhood’ and create a sense of community simultaneously.

Mystical experiences and dreams of the artist/theologian are captured in images. He tells stories about who we are. “Weevers creates space for all we hold significant, right through knowledge, cultures and religions. From the darkness of the world he retrieves the light of the enigma: clear, deep, mystical and compelling.” (Joost de Wal p. 46)

Many art lovers will enjoy this book. I would also like to see it as a textbook about art at theological faculties and as a book about artistic life wisdom at art academies. The artist succeeds in striking a general human spiritual chord, sometimes with elements of Christian imagery. “Art and biblical stories incorporate the universal in the personal, and in the personal you feel the universal.” (AW p. 66)

Weevers uses state of the art technology and, together with his team, regularly develops new methods to make the presentation as perfect as possible. An installation is often interwoven with music composed for this purpose. In order to understand the texts better, I regularly checked the discussed work. This is possible through the artist’s website, though only fragments are shown. Viewing a short excerpt without the context, one can only experience a media installation to a limited extent. Yet the book provides a lot of images and food for thought. It even helps to experience a bit of the mysterious o/Other. It reminded me of this quote from Albert Einstein:

“The most beautiful thing we can experience is the mysterious. It is the source of all true art and science. He to whom this emotion is a stranger, who can no longer pause to wonder and stand rapt in awe, is as good as dead: his eyes are closed. This insight into the mystery of life, coupled though it be with fear, has also given rise to religion. To know that what is impenetrable to us really exists, manifesting itself as the highest wisdom and the most radiant beauty which our dull faculties can comprehend only in their most primitive forms – this knowledge, this feeling, is at the center of true religiousness. In this sense, and in this sense only, I belong in the ranks of devoutly religious men.” (Albert Einstein in Living Philosophies Simon and Schuster, New York 1931)

This book review is also published on ArtWay.

Anikó Ouweneel-Tóth is a cultural historian and writer. As curator she worked with three artworks by Arent Weevers (Travelling of the Heart, Josephine’s Well, Triptych) during three different projects in monumental religious buildings. Her poetic contemplation about Triptych can be read here.