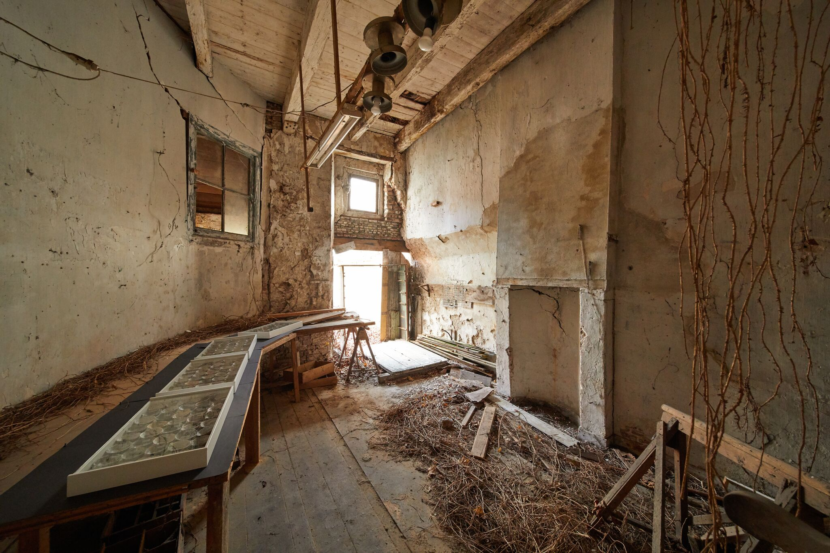 In old cities there are always hidden places full of history. One such place is the abandoned coach house behind the Art Gallery/Shop Droom & Daad [Dream & Deed] in Deventer, the Netherlands. The story is told that it used to belong to the parents of the most important Dutch composer of the Golden Age, Jan Pieterszoon Sweelinck. Most probably he himself was born in ‘Huis De Reiger’ in 1562, where the art gallery is established.

You walk through the shop and the garden, you enter the fading building and you find yourself in a different world. The old coach house was boarded shut for decades. Last year Peter-Frans de Graaf, artist and owner of the shop, opened it up to make it accessible for the project of the Art Stations of the Cross. It was completely filled with dried-up roots of plants that had long since died (see the right corner in the photo above).

Together with the installation Dead Soldiers of Ukraine by Masha Trebukova, this space forms Station 7 (Jesus falls a second time) of the current Art Stations of the Cross 2020 in Deventer. By means of the 14 Stations of the Cross of Jesus this art route provides a way to focus on the present suffering of our fellow human beings by challenging the viewer artistically, spiritually and socially. At the moment the project is closed because of the corona restrictions. This is why the curators have put together a digital pilgrimage and teaching program for schools, universities, and other interested parties (see further information below).

The (digital) pilgrimage brings you to this decaying space, where all sorts of invisible and hidden stories are whirling about and where the installation of Masha Trebukova blends in naturally yet is conspicuously present. Imagine that you find yourself in this room. What would you be thinking?

In the coach house little papier-maché bowls made of newspaper are placed in white display cases. Each bowl shows the face and dates of birth and death of a recently fallen Ukrainian soldier. These objects may remind the viewer of candleholders. The artist also placed a small wire cage with candlelight in the room. It is as if you are in a memorial space, a kind of mausoleum, but without the physical remains of the deceased. The tenderly and precisely drawn faces are delicately present in this room where time so mercilessly wreaked havoc. 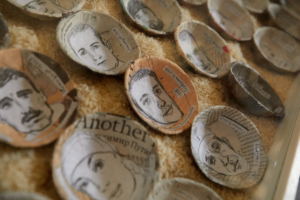 Since the beginning of 2018 the artist has been busy gathering the personal stories of the soldiers and to portray their sacrifice respectfully. These are only a few forgotten faces out of the thousands of mostly young people who fell in a conflict that is dragging on and on in the East of Europe. To render faces and their expressions is an intimate process.

Since April 2014 I have been following the war in the Ukraine closely, also on social media. Over the years and with no end in view it has become a burning issue for me. Some time ago I decided to make this intimate memorial to the fallen Ukrainian soldiers – a personal mourning ritual. Sadly the number of casualties is too great and beyond my capacity to portray, so I could only commemorate a small fraction of the more than 4,000 military victims. This cruel war is practically ignored by the general public, with the exception of an occasional peace talk or an extraordinary event like the impeachment of a president. Masha Trebukova

Visiting the stations can become a kind of a ritual. Respect for sacrifices for a greater cause connects the stations to the struggle against injustice in all ages. In this space, where transience is omnipresent, we try to honor the faded lives of these soldiers. It is a forgotten place, but these human beings are not forgotten. This station is intended to give the viewer an opportunity to stop and ponder the many conflicts of war. Most of them continue, even during the present pandemic.

Suffering has many faces.

Masha Trebukova was born in Moscow and studied there at the Surikov Art School and Academy (1974-1986), where she followed a classical education. She has been living in Amsterdam since 1991. Her exhibitions are primarily with Kunsthandel M.L. de Boer and Galerie BORZO in Amsterdam. After graduating she specialized in non-figurative art. In her recent projects she makes use of a figurative language once again. More info: www.trebukova.net/

Anikó Ouweneel is a cultural historian and art curator, who organized more than thirty art exhibitions. An expert in the area of (religious) cultural heritage, she specializes in placing modern art in ancient buildings. In 2019 she curated the Art Stations of the Cross in Amsterdam together with Marleen Hengelaar-Rookmaaker. The 2020 version in Deventer she put together with Arent Weevers. More information: www.visiodivina.eu

The curators have designed a digital pilgrimage and teaching program for schools, universities, and other interested parties. Together with an accompanying brochure in pdf-format the package can be obtained for a voluntary contribution. If interested, please contact aniko@websophia.com.

This visual meditation was published on 5 April 2020 on ArtWay.