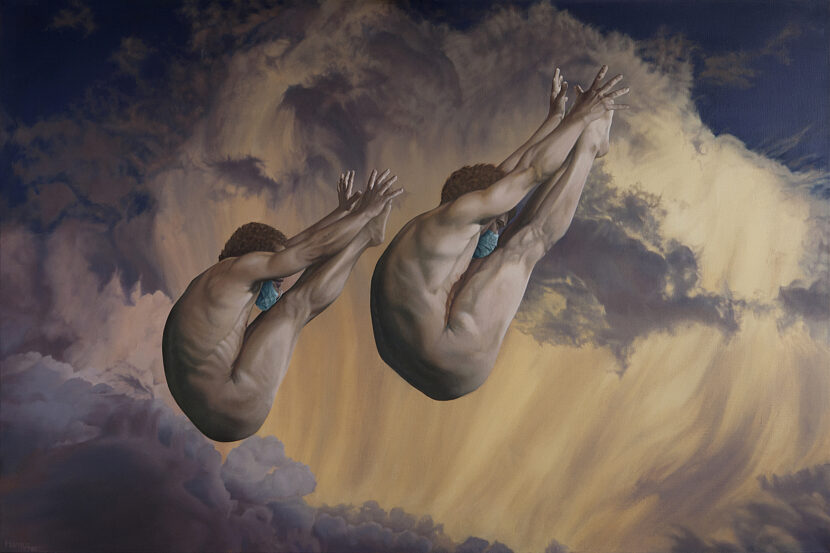 The artistic talents of painter Hansa Versteeg were always manifest, even though he started painting with oil only in his seventies. His career was centered around graphic design, where he gained vast experience in simple yet efficient visual communication. He is academically trained and has an exquisite capacity to paint fabric, facial expressions and light in the tradition of the great Dutch masters.

The oil painting Omen is one of his latest in a series in wherein he uses one or two figures in a surprisingly concise composition to convey a message very much for today yet valid for all time. The definition of the word Omen reads: “An event regarded of prophetic significance, as a portent of good or evil.”

This portent is rendered as a fall from the sky captured in action. An image depicting such an incident is not new in the history of art. The artist began this work with the idea of the mythical figure Icarus in mind, who attempted and failed an escape flying away from the island of Crete with his father. Their far too ambitious undertaking was a haughty transgression against divine rule with lethal consequences, according to the myth.

Somewhere in the windblown clouds, between the high-rise and the rock bottom, two naked men perform an acrobatic double dive. Their only pieces of clothing are disposable masks, universally familiar by now.

But are they jumping or are they falling? Or are they blown away? Following their bodies’ well-choreographed position, one senses a strong gravitation pulling them down. At the same time one can almost feel a blast blowing them away from the source of force and light somewhere way above the right-hand corner of the canvas.

Their hands are outstandingly expressive. In their well exercised and synchronized movement the hands break the perfection and silently scream for attention. They try to hold onto something. They also convey emotions like awe and despair. This posture reminds me of images of worship. If someone is confronted with something literally awe-full – far bigger than they are, wonderous and incomprehensible – they often automatically cover their face or bow their head and stretch their hands out in a similar way. It shows respect, attraction, but as one cannot foresee what comes next, it is also the gesture of despair, of begging for mercy.

You just don’t know how this motion will end. Will there be a smooth landing or a crash? Will the invisible and all-powerful presence let them fall, keep blowing them away or have mercy and save them, grasp their hands and pull them up? By the way, is it dawn or is it sundown? What does the light suggest?

And most of all: how do we compare this idea of arrogant mankind falling to the current situation of the whole world wearing face masks? What do we learn from the pandemic? Will we change our ways?

There is an absurd undertone to their movement too. It seems not at all arbitrary, but well-coordinated. We humans, we like to crash in style. We have no clue, yet we have a certain amount of control – we think. Pride goes before a fall. In need of a deus ex machina? It is so 2020. And of all times.

From the turn of the millennium Hansa (Hans Versteeg) developed rapidly. As a versatile designer his free work plays an ever-growing role, initially in the form of photography. Unexpectedly, for himself and others, Hansa made a change in 2010 to oil painting as an art form. Over a short period of time he developed into a painter with a major talent for painting fabric, similar to the masters of the 17th century such as Gerard ter Borch. Hansa, however, is inspired by the subjects in the contemporary world of the 21st century, as can be seen from his cellophane wrapped flower-still life subjects and socially relevant topics such as the refugee problem and Covid-19. (drs. Diana P.T. Kostman, art historian) http://hansaversteeg.com/

Anikó Ouweneel-Tóth is a cultural historian and art curator living in the Netherlands. She is co-author of books on contemporary art and cultural heritage. She (co)curated more than 30 art exhibitions. At the moment she is working on a European art exhibition. www.visiodivina.eu

This blog by Anikó was also published as an ArtWay Visual Meditation on 28 February 2021.