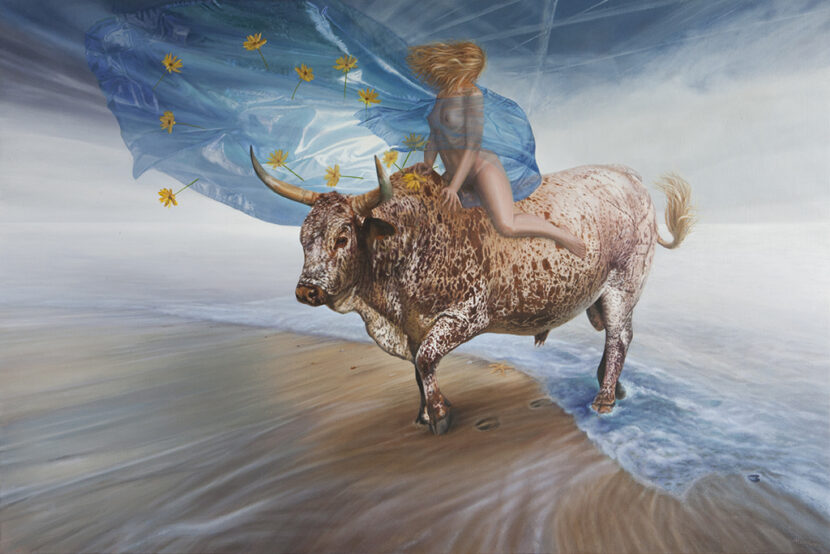 The old continent was given its name by a beautiful legendary lady. According to classical mythology Europa, a Phoenician princess, was abducted by Zeus in the shape of a bull. An image often seen in the history of art. Now we observe an interpretation for our times.

Looking at this bull and this naked woman, one question rises right away. Who is abducting or possessing whom?

There is a huge, benevolent looking beast with velvetlike fur rising from the sea carrying the lady. We do not see the face of the naked goddess riding him, it is covered with her windblown hair. She does not give away much of her personality. Though she is vulnerable in her nudity, the attitude expressed in her posture is triumphant.

A piece of waving blue fabric represents the flag of Europe. The translucent polyester is anachronistic to the myth, but so are the condense stripes in the air and her bikini suntan. There are twelve yellow flowers – symbolizing the stars – blown in the wind in front of her. One is Brexiting. The number of the stars will stay permanent on the banner in real life (there are 27 member states at the moment), that is true. But the unity, harmony and solidarity among the nations are at risk if the union starts to crumble.

The history of Europe is just as violent as the tale itself. For ages it was a militarily superior continent that was simply too powerful to stay peaceful. It fought against itself and forced itself on other parts of the world.

But by now, it has succeeded in facing its militant and aggressive past so as to find a new way of co-existence. The fact is that there has been no armed conflict within the zone of integration since 1945. And that is a long time in the turbulent history of the region. Such a long peaceful period has not occurred since the time of the Pax Romana, ages ago.

When we look at the image and we see the beast as part of the symbol of Europe as well, the masculine oppressor with divine ambitions, then it looks like he is tamed by now. The feminine and defenseless Europa seems to triumph.

This image symbolizes the vulnerability of peace for me. The balance is fragile, yet with enough power and strength to stay impressive. In the vulnerability of cooperation, of give and take, the bully is submitted. But Europa should not be overly glorified because of her sensitivity; in her pride she can become aggressive too.

The center of the painting is the heart of the bull. In this myth he defends her rather than assaults her. The lessons of the offensive past seem to have been learned. Yet the balance is precarious, one that is worthwhile to champion and defend. Let’s celebrate and be vigilant for the fragile peace of Pax Europeana.

This art contemplation by Anikó is published in the book ‘Compassionism’. The book, as well as high quality reproductions and some originals are available via the website of the artist: www.hansaversteeg.com.